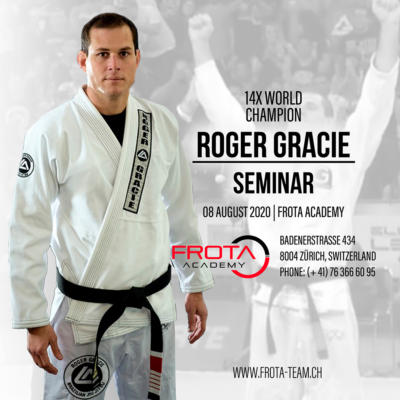 Roger Gracie is a jiu jitsu black belt, regarded by many of the sport’s fans as the greatest competitor of all time. a 14x World Champion (10 of which in the black belt division) and mixed martial arts (MMA) competitor, this Gracie family representative from Rio de Janeiro, moved to London, England in his teens, opening one of the county’s biggest academies with the help of his father, Maurício Gomes. Roger Gracie is also the grandson of jiu-jitsu founder Carlos Gracie and an inductee in the IBJJF Hall of Fame will be giving a Gi BJJ Camp in Frota Academy on :

Whatever your level of jiu-jitsu, you will benefit from up-close and personal attention.

The Camp is only for the Frota Academy members.

* If you are not a gym member and you wish to participate in this event please email us to info@frota-team.ch